Natural killer cells as an initial defense against pathogens 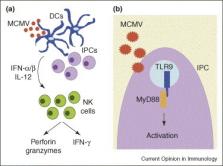 Natural killer (NK) cells serve as a crucial first line of defense against tumors and a diverse range of pathogens. Recognition of infection by NK cells is accomplished by the activation of receptors on the NK cell surface, which initiate NK cell effector functions. Many of the receptors and ligands involved in NK cell antimicrobial activity have been identified, and we are beginning to appreciate how they function during infection. In addition, NK cells are activated by cytokines (e.g. interleukin 12 and type I interferons), which are products of activated macrophages and dendritic cells. In response to these activating stimuli, NK cells secrete cytokines and chemokines and lyse target cells. Recent studies have focused on the mechanisms by which NK cells recognize and respond to viruses, parasites and bacteria, and on the unique role of NK cells in innate immunity to infection.

Karine Crozat,  Bruce Beutler,  Koichi Tabeta … (2004)
Several subsets of dendritic cells have been shown to produce type I IFN in response to viral infections, thereby assisting the natural killer cell-dependent response that eliminates the pathogen. Type I IFN production can be induced both by unmethylated CpG-oligodeoxynucleotide and by double-stranded RNA. Here, we describe a codominant CpG-ODN unresponsive phenotype that results from an N-ethyl-N-nitrosourea-induced missense mutation in the Tlr9 gene (Tlr9(CpG1)). Mice homozygous for the Tlr9(CpG1) allele are highly susceptible to mouse cytomegalovirus infection and show impaired infection-induced secretion of IFN-alpha/beta and natural killer cell activation. We also demonstrate that both the Toll-like receptor (TLR) 9 --> MyD88 and TLR3 --> Trif signaling pathways are activated in vivo on viral inoculation, and that each pathway contributes to innate defense against systemic viral infection. Whereas both pathways lead to type I IFN production, neither pathway offers full protection against mouse cytomegalovirus infection in the absence of the other. The Tlr9(CpG1) mutation alters a leucine-rich repeat motif and lies within a receptor domain that is conserved within the evolutionary cluster encompassing TLRs 7, 8, and 9. In other TLRs, including three mouse-specific TLRs described in this paper, the affected region is not represented. The phenotypic effect of the Tlr9(CpG1) allele thus points to a critical role for TLR9 in viral sensing and identifies a vulnerable amino acid within the ectodomain of three TLR proteins, essential for a ligand response.