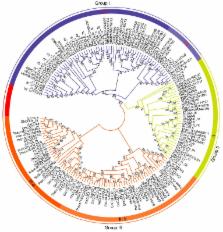 The CONSTANS (CO)-like gene family has been well studied for its role in the regulation of plant flowering time. However, their role remains poorly understood in cotton. To better understand the possible roles of CO-like in cotton, we performed a comprehensive genome-wide analysis of CO-like genes in cotton. Phylogenetic tree analysis showed that CO-like genes naturally clustered into three groups. Segmental duplication and whole genome duplication (WGD), which occurred before polyploidy, were important contributors to its expansion within the At (“t” indicates tetraploid) and Dt subgenomes, particularly in Group III. Long-terminal repeat retroelements were identified as the main transposable elements accompanying 18 genes. The genotype of GhCOL12_Dt displayed low diversity; it was a candidate involved in domestication. Selection pressure analyses indicated that relaxed purifying selection might have provided the main impetus during the evolution of CO-like genes in upland cotton. In addition, the high expression in the torus and calycle indicated that CO-like genes might affect flowering. The genes from Group II, and those from Group III involved in segmental duplication or WGD, might play important roles in response to drought and salt stress. Overall, this comprehensive genome-wide study of the CO-like gene family would facilitate further detailed studies in cotton.

Masahiro Yano,  Yuichi Katayose,  Motoyuki Ashikari … (2000)
A major quantitative trait locus (QTL) controlling response to photoperiod, Hd1, was identified by means of a map-based cloning strategy. High-resolution mapping using 1505 segregants enabled us to define a genomic region of approximately 12 kb as a candidate for Hd1. Further analysis revealed that the Hd1 QTL corresponds to a gene that is a homolog of CONSTANS in Arabidopsis. Sequencing analysis revealed a 43-bp deletion in the first exon of the photoperiod sensitivity 1 (se1) mutant HS66 and a 433-bp insertion in the intron in mutant HS110. Se1 is allelic to the Hd1 QTL, as determined by analysis of two se1 mutants, HS66 and HS110. Genetic complementation analysis proved the function of the candidate gene. The amount of Hd1 mRNA was not greatly affected by a change in length of the photoperiod. We suggest that Hd1 functions in the promotion of heading under short-day conditions and in inhibition under long-day conditions.

G Coupland,  James F. Robson,  J Putterill … (1995)
The vegetative and reproductive (flowering) phases of Arabidopsis development are clearly separated. The onset of flowering is promoted by long photoperiods, but the constans (co) mutant flowers later than wild type under these conditions. The CO gene was isolated, and two zinc fingers that show a similar spacing of cysteines, but little direct homology, to members of the GATA1 family were identified in the amino acid sequence. co mutations were shown to affect amino acids that are conserved in both fingers. Some transgenic plants containing extra copies of CO flowered earlier than wild type, suggesting that CO activity is limiting on flowering time. Double mutants were constructed containing co and mutations affecting gibberellic acid responses, meristem identity, or phytochrome function, and their phenotypes suggested a model for the role of CO in promoting flowering.

The contributions of transposable elements to the structure, function, and evolution of plant genomes.

Jeffrey Bennetzen,  Hao Wang (2014)
Transposable elements (TEs) are the key players in generating genomic novelty by a combination of the chromosome rearrangements they cause and the genes that come under their regulatory sway. Genome size, gene content, gene order, centromere function, and numerous other aspects of nuclear biology are driven by TE activity. Although the origins and attitudes of TEs have the hallmarks of selfish DNA, there are numerous cases where TE components have been co-opted by the host to create new genes or modify gene regulation. In particular, epigenetic regulation has been transformed from a process to silence invading TEs and viruses into a key strategy for regulating plant genes. Most, perhaps all, of this epigenetic regulation is derived from TE insertions near genes or TE-encoded factors that act in trans. Enormous pools of genome data and new technologies for reverse genetics will lead to a powerful new era of TE analysis in plants.

These authors are contributed equally.