Conformational Ensemble of hIAPP Dimer: Insight into the Molecular Mechanism by which a Green Tea Extract inhibits hIAPP Aggregation 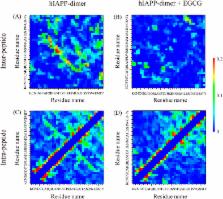 Small oligomers formed early along human islet amyloid polypeptide (hIAPP) aggregation is responsible for the cell death in Type II diabetes. The epigallocatechin gallate (EGCG), a green tea extract, was found to inhibit hIAPP fibrillation. However, the inhibition mechanism and the conformational distribution of the smallest hIAPP oligomer – dimer are mostly unknown. Herein, we performed extensive replica exchange molecular dynamic simulations on hIAPP dimer with and without EGCG molecules. Extended hIAPP dimer conformations, with a collision cross section value similar to that observed by ion mobility-mass spectrometry, were observed in our simulations. Notably, these dimers adopt a three-stranded antiparallel β-sheet and contain the previously reported β-hairpin amyloidogenic precursor. We find that EGCG binding strongly blocks both the inter-peptide hydrophobic and aromatic-stacking interactions responsible for inter-peptide β-sheet formation and intra-peptide interaction crucial for β-hairpin formation, thus abolishes the three-stranded β-sheet structures and leads to the formation of coil-rich conformations. Hydrophobic, aromatic-stacking, cation-π and hydrogen-bonding interactions jointly contribute to the EGCG-induced conformational shift. This study provides, on atomic level, the conformational ensemble of hIAPP dimer and the molecular mechanism by which EGCG inhibits hIAPP aggregation.

Advances in methods and algorithms in a modern quantum chemistry program package.

Prakashan Korambath,  D. Cory Adamson,  Peter Gill … (2006)
Advances in theory and algorithms for electronic structure calculations must be incorporated into program packages to enable them to become routinely used by the broader chemical community. This work reviews advances made over the past five years or so that constitute the major improvements contained in a new release of the Q-Chem quantum chemistry package, together with illustrative timings and applications. Specific developments discussed include fast methods for density functional theory calculations, linear scaling evaluation of energies, NMR chemical shifts and electric properties, fast auxiliary basis function methods for correlated energies and gradients, equation-of-motion coupled cluster methods for ground and excited states, geminal wavefunctions, embedding methods and techniques for exploring potential energy surfaces.

Ehud Gazit,  Yair Porat,  Adel Abramowitz (2005)
The formation of well-ordered fibrillar protein deposits is common to a large group of amyloid-associated disorders. This group consists of several major human diseases such as Alzheimer's disease, Parkinson's disease, prion diseases, and type II diabetes. Currently, there is no approved therapeutic agent directed towards the formation of fibrillar assemblies, which have been recently shown to have a key role in the cytotoxic nature of amyloidogenic proteins. One important approach in the development of therapeutic agents is the use of small molecules that specifically and efficiently inhibit the aggregation process. Several small polyphenol molecules have been demonstrated to remarkably inhibit the formation of fibrillar assemblies in vitro and their associated cytotoxicity. Yet, the inhibition mechanism was mostly attributed to the antioxidative properties of these polyphenol compounds. Based on several observations demonstrating that polyphenols are capable of inhibiting amyloid fibril formation in vitro, regardless of oxidative conditions, and in view of their structural similarities we suggest an additional mechanism of action. This mechanism is assuming structural constraints and specific aromatic interactions, which direct polyphenol inhibitors to the amyloidogenic core. This proposed mechanism is highly relevant for future de novo inhibitors' design as therapeutic agents for the treatment of amyloid-associated diseases.