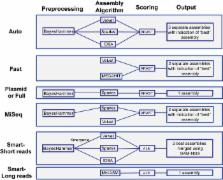 The Pathosystems Resource Integration Center (PATRIC) is the bacterial Bioinformatics Resource Center ( https://www.patricbrc.org). Recent changes to PATRIC include a redesign of the web interface and some new services that provide users with a platform that takes them from raw reads to an integrated analysis experience. The redesigned interface allows researchers direct access to tools and data, and the emphasis has changed to user-created genome-groups, with detailed summaries and views of the data that researchers have selected. Perhaps the biggest change has been the enhanced capability for researchers to analyze their private data and compare it to the available public data. Researchers can assemble their raw sequence reads and annotate the contigs using RASTtk. PATRIC also provides services for RNA-Seq, variation, model reconstruction and differential expression analysis, all delivered through an updated private workspace. Private data can be compared by ‘virtual integration’ to any of PATRIC's public data. The number of genomes available for comparison in PATRIC has expanded to over 80 000, with a special emphasis on genomes with antimicrobial resistance data. PATRIC uses this data to improve both subsystem annotation and k-mer classification, and tags new genomes as having signatures that indicate susceptibility or resistance to specific antibiotics.

Andrew McArthur, Nicholas Waglechner, Fazmin Nizam … (2013)
The field of antibiotic drug discovery and the monitoring of new antibiotic resistance elements have yet to fully exploit the power of the genome revolution. Despite the fact that the first genomes sequenced of free living organisms were those of bacteria, there have been few specialized bioinformatic tools developed to mine the growing amount of genomic data associated with pathogens. In particular, there are few tools to study the genetics and genomics of antibiotic resistance and how it impacts bacterial populations, ecology, and the clinic. We have initiated development of such tools in the form of the Comprehensive Antibiotic Research Database (CARD; http://arpcard.mcmaster.ca). The CARD integrates disparate molecular and sequence data, provides a unique organizing principle in the form of the Antibiotic Resistance Ontology (ARO), and can quickly identify putative antibiotic resistance genes in new unannotated genome sequences. This unique platform provides an informatic tool that bridges antibiotic resistance concerns in health care, agriculture, and the environment.

The potential and challenges of nanopore sequencing.

Daniel Branton, David W. Deamer, Andre Marziali … (2008)
A nanopore-based device provides single-molecule detection and analytical capabilities that are achieved by electrophoretically driving molecules in solution through a nano-scale pore. The nanopore provides a highly confined space within which single nucleic acid polymers can be analyzed at high throughput by one of a variety of means, and the perfect processivity that can be enforced in a narrow pore ensures that the native order of the nucleobases in a polynucleotide is reflected in the sequence of signals that is detected. Kilobase length polymers (single-stranded genomic DNA or RNA) or small molecules (e.g., nucleosides) can be identified and characterized without amplification or labeling, a unique analytical capability that makes inexpensive, rapid DNA sequencing a possibility. Further research and development to overcome current challenges to nanopore identification of each successive nucleotide in a DNA strand offers the prospect of 'third generation' instruments that will sequence a diploid mammalian genome for approximately $1,000 in approximately 24 h.

Bo Liu, Mihai Pop (2009)
The treatment of infections is increasingly compromised by the ability of bacteria to develop resistance to antibiotics through mutations or through the acquisition of resistance genes. Antibiotic resistance genes also have the potential to be used for bio-terror purposes through genetically modified organisms. In order to facilitate the identification and characterization of these genes, we have created a manually curated database—the Antibiotic Resistance Genes Database (ARDB)—unifying most of the publicly available information on antibiotic resistance. Each gene and resistance type is annotated with rich information, including resistance profile, mechanism of action, ontology, COG and CDD annotations, as well as external links to sequence and protein databases. Our database also supports sequence similarity searches and implements an initial version of a tool for characterizing common mutations that confer antibiotic resistance. The information we provide can be used as compendium of antibiotic resistance factors as well as to identify the resistance genes of newly sequenced genes, genomes, or metagenomes. Currently, ARDB contains resistance information for 13 293 genes, 377 types, 257 antibiotics, 632 genomes, 933 species and 124 genera. ARDB is available at http://ardb.cbcb.umd.edu/.