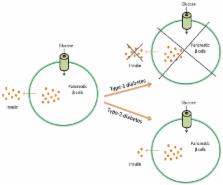 Diabetes is a chronic degenerative metabolic disease with high morbidity and mortality rates caused by its complications. In recent years, there has been a growing interest in looking for new bioactive compounds to treat this disease, including metabolites of marine origin. Several aquatic organisms have been screened to evaluate their possible anti-diabetes activities, such as bacteria, microalgae, macroalgae, seagrasses, sponges, corals, sea anemones, fish, salmon skin, a shark fusion protein as well as fish and shellfish wastes. Both in vitro and in vivo screenings have been used to test anti-hyperglycemic and anti-diabetic activities of marine organisms. This review summarizes recent discoveries in anti-diabetes properties of several marine organisms as well as marine wastes, existing patents and possible future research directions in this field.

Marine Sponge Derived Natural Products between 2001 and 2010: Trends and Opportunities for Discovery of Bioactives

Mohammad Mehbub,  Jie Lei,  Christopher M.M. Franco … (2014)
Marine sponges belonging to the phylum Porifera (Metazoa), evolutionarily the oldest animals are the single best source of marine natural products. The present review presents a comprehensive overview of the source, taxonomy, country of origin or geographical position, chemical class, and biological activity of sponge-derived new natural products discovered between 2001 and 2010. The data has been analyzed with a view to gaining an outlook on the future trends and opportunities in the search for new compounds and their sources from marine sponges.

Bioactive peptides from marine processing waste and shellfish: A review

Aldehyde suppression of copepod recruitment in blooms of a ubiquitous planktonic diatom.

I. Buttino,  Ylenia Carotenuto,  Luca Colucci-D’Amato … (2004)
The growth cycle in nutrient-rich, aquatic environments starts with a diatom bloom that ends in mass sinking of ungrazed cells and phytodetritus. The low grazing pressure on these blooms has been attributed to the inability of overwintering copepod populations to track them temporally. We tested an alternative explanation: that dominant diatom species impair the reproductive success of their grazers. We compared larval development of a common overwintering copepod fed on a ubiquitous, early-blooming diatom species with its development when fed on a typical post-bloom dinoflagellate. Development was arrested in all larvae in which both mothers and their larvae were fed the diatom diet. Mortality remained high even if larvae were switched to the dinoflagellate diet. Aldehydes, cleaved from a fatty acid precursor by enzymes activated within seconds after crushing of the cell, elicit the teratogenic effect. This insidious mechanism, which does not deter the herbivore from feeding but impairs its recruitment, will restrain the cohort size of the next generation of early-rising overwinterers. Such a transgenerational plant-herbivore interaction could explain the recurringly inefficient use of a predictable, potentially valuable food resource--the spring diatom bloom--by marine zooplankton.