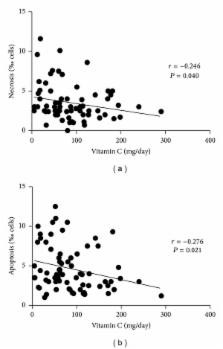 Hyperglycemia leads to the formation of free radicals and advanced glycation end-products (AGEs). Antioxidants can reduce the level of protein glycation and DNA damage. In this study, we compared the levels of vitamin C intake, which is among the most abundant antioxidants obtained from diet, with the levels of fasting plasma glucose (FPG), glycated hemoglobin (A1C), DNA damage, and cytotoxicity in prediabetic subjects and type 2 diabetic subjects. Our results indicated that there was no significant correlation between FPG or A1C and DNA damage parameters (micronuclei, nucleoplasmic bridges, and nuclear buds). FPG and A1C correlated with necrosis ( r = 0.294; P = 0.013 and r = 0.401; P = 0.001, resp.). Vitamin C intake correlated negatively with necrosis and apoptosis ( r = −0.246; P = 0.040, and r = −0.276; P = 0.021, resp.). The lack of a correlation between the FPG and A1C and DNA damage could be explained, at least in part, by the elimination of cells with DNA damage by either necrosis or apoptosis (cytotoxicity). Vitamin C appeared to improve cell survival by reducing cytotoxicity. Therefore, the present results indicate the need for clinical studies to evaluate the effect of low-dose vitamin C supplementation in type 2 diabetes.

Measurement of micronuclei in lymphocytes.

M Fenech, A Morley (2015)
The micronucleus technique has been proposed as a method for measurement of chromosomal damage in mitogen-stimulated human lymphocytes. Micronuclei require one cell division to be expressed and, consequently, the conventional micronucleus technique is very imprecise since the cells which have undergone only one division, and the micronuclei in them, cannot be identified separately from the total population of lymphocytes. To overcome this problem, two methods were developed to identify cells which have undergone their first mitosis. Using an autoradiographic technique, lymphocytes were pulse-labelled with [3H]thymidine at 48 h of culture, allowed to proceed through mitosis, identified by autoradiography between 72 and 84 h and micronuclei were scored in them. It was not possible to select a concentration of radiolabel which did not itself produce micronuclei and consequently the method was of no value for measuring pre-existing chromosomal damage present in vivo. However, it was capable of quantitating micronuclei produced by irradiation of lymphocytes in vitro. In the second method, cytokinesis was blocked using cytochalasin B. Micronuclei were scored in cytokinesis-blocked cells. These were easily recognisable owing to their binucleate appearance and a large number could be accumulated by adding 3.0 micrograms/ml cytochalasin B at 44 h and scoring at 72 h. Cytochalasin B did not itself produce micronuclei. The cytokinesis-block method was simple to perform; the 'in vivo' micronucleus frequency in normal individuals was 4.4 +/- 2.6 micronuclei/500 cytokinesis-blocked cells; and for lymphocytes irradiated in vitro there was a linear relationship between dose of radiation and number of induced micronuclei. The cytokinesis-block method appears to be the procedure of choice for quantitating micronuclei in lymphocytes.

J Lunec, L Duarte (2005)
Vitamin C (or ascorbic acid) is regarded as the most important water-soluble antioxidant in human plasma and mammalian cells which have mechanisms to recycle and accumulate it against a concentration gradient, suggesting that the vitamin might also have important intracellular functions. In this review we summarize evidence from human trials that have attempted an association between vitamin C supplementation and an effect on biomarkers of oxidative DNA damage. Most studies reviewed herein showed either a vitamin C-mediated reduction in oxidative DNA damage or a null effect, whereas only a few studies showed an increase in specific base lesions. We also address the possible beneficial effects of vitamin C supplementation for the prevention of cancer and cardiovascular disease. Finally, we discuss the contribution of cell culture studies to our understanding of the mode of action of vitamin C and we review recent evidence that vitamin C is able to modulate gene expression and cellular function, with a particular interest in cell differentiation.