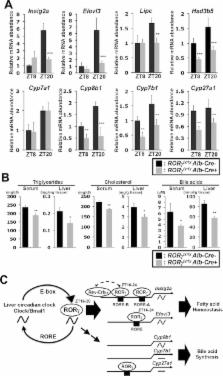 The hepatic circadian clock plays a pivotal role in regulating major aspects of energy homeostasis and lipid metabolism. In this study, we show that RORγ robustly regulates the rhythmic expression of several lipid metabolic genes, including the insulin-induced gene 2a, Insig2a, elongation of very long chain fatty acids-like 3, Elovl3 and sterol 12α-hydroxylase, Cyp8b1, by enhancing their expression at ZT20-4. The time-dependent increase in their expression correlates with the rhythmic expression pattern of RORγ. The enhanced recruitment of RORγ to ROREs in their promoter region, increased histone acetylation, and reporter and mutation analysis support the concept that RORγ regulates the transcription of several lipid metabolic genes directly by binding ROREs in their promoter regulatory region. Consistent with the disrupted expression of a number of lipid metabolic genes, loss of ROR γ reduced the level of several lipids in liver and blood in a ZT-preferred manner. Particularly the whole-body bile acid pool size was considerably reduced in RORγ −/− mice in part through its regulation of several Cyp genes. Similar observations were made in liver-specific RORγ-deficient mice. Altogether, our study indicates that RORγ functions as an important link between the circadian clock and the transcriptional regulation of several metabolic genes.

Circadian integration of metabolism and energetics.

Transcriptional architecture and chromatin landscape of the core circadian clock in mammals.

Megumi Hatori,  Christopher Vollmers,  Amir Zarrinpar … (2012)
While diet-induced obesity has been exclusively attributed to increased caloric intake from fat, animals fed a high-fat diet (HFD) ad libitum (ad lib) eat frequently throughout day and night, disrupting the normal feeding cycle. To test whether obesity and metabolic diseases result from HFD or disruption of metabolic cycles, we subjected mice to either ad lib or time-restricted feeding (tRF) of a HFD for 8 hr per day. Mice under tRF consume equivalent calories from HFD as those with ad lib access yet are protected against obesity, hyperinsulinemia, hepatic steatosis, and inflammation and have improved motor coordination. The tRF regimen improved CREB, mTOR, and AMPK pathway function and oscillations of the circadian clock and their target genes' expression. These changes in catabolic and anabolic pathways altered liver metabolome and improved nutrient utilization and energy expenditure. We demonstrate in mice that tRF regimen is a nonpharmacological strategy against obesity and associated diseases. Copyright © 2012 Elsevier Inc. All rights reserved.