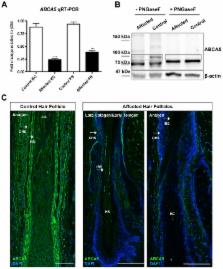 Inherited hypertrichoses are rare syndromes characterized by excessive hair growth that does not result from androgen stimulation, and are often associated with additional congenital abnormalities. In this study, we investigated the genetic defect in a case of autosomal recessive congenital generalized hypertrichosis terminalis (CGHT) (OMIM135400) using whole-exome sequencing. We identified a single base pair substitution in the 5′ donor splice site of intron 32 in the ABC lipid transporter gene ABCA5 that leads to aberrant splicing of the transcript and a decrease in protein levels throughout patient hair follicles. The homozygous recessive disruption of ABCA5 leads to reduced lysosome function, which results in an accumulation of autophagosomes, autophagosomal cargos as well as increased endolysosomal cholesterol in CGHT keratinocytes. In an unrelated sporadic case of CGHT, we identified a 1.3 Mb cryptic deletion of chr17q24.2-q24.3 encompassing ABCA5 and found that ABCA5 levels are dramatically reduced throughout patient hair follicles. Collectively, our findings support ABCA5 as a gene underlying the CGHT phenotype and suggest a novel, previously unrecognized role for this gene in regulating hair growth.

Inherited hypertrichoses represent a group of hair overgrowth syndromes that are extremely rare in humans and have remained an area of great interest to evolutionary geneticists since they are considered to be recurrences of an ancestral phenotype. These syndromes often present with additional congenital abnormalities including bone, heart and dental defects; thus, it is crucial to identify the mechanisms and genes underlying the pathology. Copy number variants (CNVs) have previously been reported in several cases of congenital generalized hypertrichosis terminalis (CGHT) with a minimal overlapping region of 555 kb encompassing four genes. However, no point mutations in these or any other single genes have been described to underlie the CGHT phenotype. In this study, we report the first loss-of-function mutation in an ABC transporter, ABCA5 and identified an additional copy number variant in a separate case that lies within the minimal common region. We found high levels of ABCA5 expression in both epithelial and mesenchymal compartments of human and mouse hair follicles, and in CGHT patients, this expression is significantly reduced or completely lost. ABCA5 is a lysosomal protein, and its loss-of-function compromises the integrity of lysosomes and leads to an intra-endolysosomal accumulation of cholesterol. Importantly, our findings support a novel role for ABCA5 in regulating hair growth.

L Cartegni (2003)
Point mutations frequently cause genetic diseases by disrupting the correct pattern of pre-mRNA splicing. The effect of a point mutation within a coding sequence is traditionally attributed to the deduced change in the corresponding amino acid. However, some point mutations can have much more severe effects on the structure of the encoded protein, for example when they inactivate an exonic splicing enhancer (ESE), thereby resulting in exon skipping. ESEs also appear to be especially important in exons that normally undergo alternative splicing. Different classes of ESE consensus motifs have been described, but they are not always easily identified. ESEfinder (http://exon.cshl.edu/ESE/) is a web-based resource that facilitates rapid analysis of exon sequences to identify putative ESEs responsive to the human SR proteins SF2/ASF, SC35, SRp40 and SRp55, and to predict whether exonic mutations disrupt such elements.

This work was supported by NIH/NIAMS Grant P30AR44535 ( http://www.niams.nih.gov/) GMD was supported by Columbia University Department of Genetics and Development Training Grant (T32GM007088) and is now supported by an F31 fellowship (NIH/NIDCR; F31 DE023472-01A1). This work was supported in part by the Skin Disease Research Center in the Department of Dermatology at Columbia University (USPHS P3044345) and the NIH/NIAMS Grant R01AR44924 (to AMC). ( http://www.niams.nih.gov/) The funders had no role in study design, data collection and analysis, decision to publish, or preparation of the manuscript.