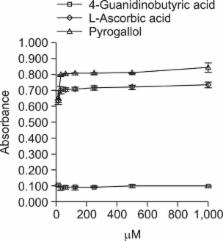 This study examined the inhibitory effects of 4-guanidinobutyric acid (4GBA), an alkaloid, against gastric lesions by assessing the inhibition of Helicobacter pylori ( H. pylori) and gastric cancer cells. Acute and chronic gastritis were also observed using HCl/ethanol (EtOH) and indomethacin-induced gastric lesion models, respectively. 4GBA inhibited the growth of H. pylori in a dose dependent manner, and showed acid-neutralizing capacity. In the pylorus ligated rats, 4GBA decreased the volume of gastric secretion and gastric acid output slightly, and increased the pH. 4GBA at a dose of 100 mg/kg reduced the size of HCl/EtOH-induced gastric lesions (70.8%) and indomethacin-induced gastric lesions (38.8%). The antigastritic action of 4GBA might be associated with the acid-neutralizing capacity, anti- H. pylori action, and decreased volume of gastric secretion. These results suggest that 4GBA might be useful in the treatment and/or protection of gastritis.

Timothy W Kraft,  R D Leunk,  D Morgan … (1988)
Broth-culture filtrates of Campylobacter pylori induced non-lethal cytopathic effects in vitro in 7 of 9 mammalian cell lines tested. Transmission electronmicroscopy revealed that the response consisted of intracellular vacuolisation. Intestine 407 cells were among the most responsive and were used for routine assay. About 55% of isolates of C. pylori tested, originating from four geographic regions worldwide, produced cytotoxic activity. The activity was neutralisable by specific antisera to broth-culture filtrates or to sonicated bacteria but not by antisera to other bacterial preparations. Cytotoxic activity was heat-labile (70 degrees C for 30 min), was protease-sensitive and ammonium-sulphate precipitable. It did not pass through an ultrafiltration membrane with a nominal mol.-wt limit of 100 X 10(3). It was concluded that C. pylori can produce a factor that alters cultured cells in vitro. The relevance of this factor to the pathogenesis of gastritis associated with C. pylori remains to be determined.

The antioxidative and antihistaminic properties of quercetin in ethanol-induced gastric lesions.

Ahmet Kahraman,  Nilüfer Erkasap,  Tülay Köken … (2003)
The role of reactive oxygen species in the pathogenesis of acute ethanol-induced gastric mucosal lesions and the effects of quercetin were evaluated in an experimental model. In addition, the effects of quercetin on gastric damage were evaluated histopathologically. Rats were divided into three groups as control rats, ethanol treated rats and ethanol+quercetin treated rats. Ethanol group was given a gastric gavage containing 1 ml of 80% ethanol (v/v) prepared in distilled water. Quercetin (200 mg/kg body wt.) was given by intragastric gavage 120 min before the administration of ethanol. Gastric tissue thiobarbituric acid reactive substance levels, carbonyl compounds, histamine levels and myeloperoxidase activities were found to be increased in ethanol treated rats and quercetin treatment reversed these increases. No statistically significant changes were found between all groups in catalase activity. The superoxide dismutase activity dropped significantly after ethanol treatment and quercetin treatment increased this enzyme activity. Gastric damage was confirmed histomorphometrically by significant increases in the number of mast cells and gastric erosions in ethanol treated rats. It was also confirmed that quercetin treatment significantly decreased the number of mast cells and reduced the area of gastric erosions. The results suggest that the gastroprotective effect of quercetin in this experimental model could be due to its antiperoxidative, antioxidant and antihistaminic effects.