The Long Non-Coding RNAs: A New (P)layer in the “Dark Matter” 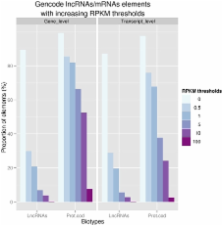 The transcriptome of a cell is represented by a myriad of different RNA molecules with and without protein-coding capacities. In recent years, advances in sequencing technologies have allowed researchers to more fully appreciate the complexity of whole transcriptomes, showing that the vast majority of the genome is transcribed, producing a diverse population of non-protein coding RNAs (ncRNAs). Thus, the biological significance of non-coding RNAs (ncRNAs) have been largely underestimated. Amongst these multiple classes of ncRNAs, the long non-coding RNAs (lncRNAs) are apparently the most numerous and functionally diverse. A small but growing number of lncRNAs have been experimentally studied, and a view is emerging that these are key regulators of epigenetic gene regulation in mammalian cells. LncRNAs have already been implicated in human diseases such as cancer and neurodegeneration, highlighting the importance of this emergent field. In this article, we review the catalogs of annotated lncRNAs and the latest advances in our understanding of lncRNAs.

The transcriptional landscape of the mammalian genome.

J Quackenbush,  P Carninci,  T Kasukawa … (2005)
This study describes comprehensive polling of transcription start and termination sites and analysis of previously unidentified full-length complementary DNAs derived from the mouse genome. We identify the 5' and 3' boundaries of 181,047 transcripts with extensive variation in transcripts arising from alternative promoter usage, splicing, and polyadenylation. There are 16,247 new mouse protein-coding transcripts, including 5154 encoding previously unidentified proteins. Genomic mapping of the transcriptome reveals transcriptional forests, with overlapping transcription on both strands, separated by deserts in which few transcripts are observed. The data provide a comprehensive platform for the comparative analysis of mammalian transcriptional regulation in differentiation and development.

Florian Pauler,  Takashi Nagano,  Peter Fraser … (2008)
A number of large noncoding RNAs (ncRNAs) epigenetically silence genes through unknown mechanisms. The Air ncRNA is imprinted--monoallelically expressed from the paternal allele. Air is required for allele-specific silencing of the cis-linked Slc22a3, Slc22a2, and Igf2r genes in mouse placenta. We show that Air interacts with the Slc22a3 promoter chromatin and the H3K9 histone methyltransferase G9a in placenta. Air accumulates at the Slc22a3 promoter in correlation with localized H3K9 methylation and transcriptional repression. Genetic ablation of G9a results in nonimprinted, biallelic transcription of Slc22a3. Truncated Air fails to accumulate at the Slc22a3 promoter, which results in reduced G9a recruitment and biallelic transcription. Our results suggest that Air, and potentially other large ncRNAs, target repressive histone-modifying activities through molecular interaction with specific chromatin domains to epigenetically silence transcription.

Gerton Lunter,  Jasmina Ponjavic,  Chris P. Ponting (2007)
Long transcripts that do not encode protein have only rarely been the subject of experimental scrutiny. Presumably, this is owing to the current lack of evidence of their functionality, thereby leaving an impression that, instead, they represent "transcriptional noise." Here, we describe an analysis of 3122 long and full-length, noncoding RNAs ("macroRNAs") from the mouse, and compare their sequences and their promoters with orthologous sequence from human and from rat. We considered three independent signatures of purifying selection related to substitutions, sequence insertions and deletions, and splicing. We find that the evolution of the set of noncoding RNAs is not consistent with neutralist explanations. Rather, our results indicate that purifying selection has acted on the macroRNAs' promoters, primary sequence, and consensus splice site motifs. Promoters have experienced the greatest elimination of nucleotide substitutions, insertions, and deletions. The proportion of conserved sequence (4.1%-5.5%) in these macroRNAs is comparable to the density of exons within protein-coding transcripts (5.2%). These macroRNAs, taken together, thus possess the imprint of purifying selection, thereby indicating their functionality. Our findings should now provide an incentive for the experimental investigation of these macroRNAs' functions.