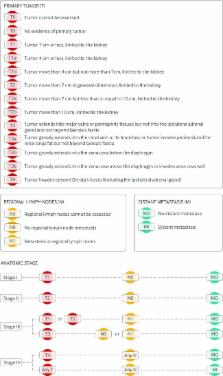 The treatment of renal cell carcinoma (RCC) has changed greatly over the past 15 years. Progress in the surgical management of the primary tumor and increased understanding of the molecular biology and genomics of the disease have led to the development of new therapeutic agents. The management of the primary tumor has changed owing to the realization that clean margins around the primary lesion are sufficient to prevent local recurrence, as well as the development of more sophisticated tools and techniques that increase the safety of partial nephrectomy. The management of advanced disease has altered even more dramatically as a result of new agents that target the tumor vasculature or that attenuate the activation of intracellular oncogenic pathways. This review summarizes data from prospective randomized phase III studies on the surgical management and systemic treatment of RCC, and provides an up to date summary of the histology, genomics, staging, and prognosis of RCC. It describes the management of the primary tumor and offers an overview of systemic agents that form the mainstay of treatment for advanced disease. The review concludes with an introduction to the exciting new class of immunomodulatory agents that are currently in clinical trials and may form the basis of a new therapeutic approach for patients with advanced RCC.

Ali R. Golshayan,  Daniel Heng,  Alexandra Bukowski … (2009)
There are no robust data on prognostic factors for overall survival (OS) in patients with metastatic renal cell carcinoma (RCC) treated with vascular endothelial growth factor (VEGF) -targeted therapy. Baseline characteristics and outcomes on 645 patients with anti-VEGF therapy-naïve metastatic RCC were collected from three US and four Canadian cancer centers. Cox proportional hazards regression, followed by bootstrap validation, was used to identify independent prognostic factors for OS. The median OS for the whole cohort was 22 months (95% CI, 20.2 to 26.5 months), and the median follow-up was 24.5 months. Overall, 396, 200, and 49 patients were treated with sunitinib, sorafenib, and bevacizumab, respectively. Four of the five adverse prognostic factors according to the Memorial Sloan-Kettering Cancer Center (MSKCC) were independent predictors of short survival: hemoglobin less than the lower limit of normal (P < .0001), corrected calcium greater than the upper limit of normal (ULN; P = .0006), Karnofsky performance status less than 80% (P < .0001), and time from diagnosis to treatment of less than 1 year (P = .01). In addition, neutrophils greater than the ULN (P < .0001) and platelets greater than the ULN (P = .01) were independent adverse prognostic factors. Patients were segregated into three risk categories: the favorable-risk group (no prognostic factors; n = 133), in which median OS (mOS) was not reached and 2-year OS (2y OS) was 75%; the intermediate-risk group (one or two prognostic factors; n = 301), in which mOS was 27 months and 2y OS was 53%; and the poor-risk group (three to six prognostic factors; n = 152), in which mOS was 8.8 months and 2y OS was 7% (log-rank P < .0001). The C-index was 0.73. This model validates components of the MSKCC model with the addition of platelet and neutrophil counts and can be incorporated into patient care and into clinical trials that use VEGF-targeted agents.

Guideline for management of the clinical T1 renal mass.

Rising incidence of renal cell cancer in the United States.

Joseph Fraumeni,  Lesley W. Chow,  Susan S Devesa … (1999)
Clinical surveys have revealed that incidental detection of renal cell carcinoma is rising because of increased use of imaging procedures. To examine incidence, mortality, and survival trends of renal cell and renal pelvis cancers by age, sex, race, and tumor stage at diagnosis. Calculation of age-adjusted incidence and mortality rates, along with 5-year relative survival rates, using data from the National Cancer Institute's Surveillance, Epidemiology, and End Results (SEER) program. Patients diagnosed as having kidney cancer from 1975 through 1995 in the 9 geographic areas covered by tumor registries in the SEER program, which represent about 10% of the US population. Incidence, mortality, and 5-year relative survival rates by time periods. The age-adjusted incidence rates for renal cell carcinoma between 1975 and 1995 for white men, white women, black men, and black women were 9.6, 4.4, 11.1, and 4.9 per 100000 person-years, respectively. The corresponding rates for renal pelvis cancer were 1.5, 0.7, 0.8, and 0.5 per 100000 person-years. Renal cell cancer incidence rates increased steadily between 1975 and 1995, by 2.3% annually among white men, 3.1 % among white women, 3.9% among black men, and 4.3% among black women. Increases were greatest for localized tumors but were also seen for more advanced and unstaged tumors. In contrast, the incidence rates for renal pelvis cancer declined among white men and remained stable among white women and blacks. Although 5-year relative survival rates for patients with renal cell cancer improved among whites but not among blacks, kidney cancer mortality rates increased in all race and sex groups. Increasing detection of presymptomatic tumors by imaging procedures, such as ultrasonography, computed tomography, and magnetic resonance imaging, does not fully explain the upward incidence trends of renal cell carcinoma. Other factors may be contributing to the rapidly increasing incidence of renal cell cancer in the United States, particularly among blacks.