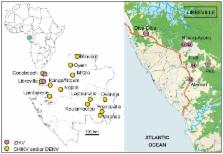 Chikungunya and dengue viruses emerged in Gabon in 2007, with large outbreaks primarily affecting the capital Libreville and several northern towns. Both viruses subsequently spread to the south-east of the country, with new outbreaks occurring in 2010. The mosquito species Aedes albopictus, that was known as a secondary vector for both viruses, recently invaded the country and was the primary vector involved in the Gabonese outbreaks. We conducted a retrospective study of human sera and mosquitoes collected in Gabon from 2007 to 2010, in order to identify other circulating arboviruses.

Sample collections, including 4312 sera from patients presenting with painful febrile disease, and 4665 mosquitoes belonging to 9 species, split into 247 pools (including 137 pools of Aedes albopictus), were screened with molecular biology methods. Five human sera and two Aedes albopictus pools, all sampled in an urban setting during the 2007 outbreak, were positive for the flavivirus Zika (ZIKV). The ratio of Aedes albopictus pools positive for ZIKV was similar to that positive for dengue virus during the concomitant dengue outbreak suggesting similar mosquito infection rates and, presumably, underlying a human ZIKV outbreak. ZIKV sequences from the envelope and NS3 genes were amplified from a human serum sample. Phylogenetic analysis placed the Gabonese ZIKV at a basal position in the African lineage, pointing to ancestral genetic diversification and spread.

We provide the first direct evidence of human ZIKV infections in Gabon, and its first occurrence in the Asian tiger mosquito, Aedes albopictus. These data reveal an unusual natural life cycle for this virus, occurring in an urban environment, and potentially representing a new emerging threat due to this novel association with a highly invasive vector whose geographic range is still expanding across the globe.

Not previously considered an important human arboviral pathogen, the epidemic capacity of Zika virus (ZIKV, a dengue-related flavivirus) was revealed by the Micronesia outbreak in 2007, which affected about 5000 persons. Widely distributed throughout tropical areas of Asia and Africa, ZIKV is transmitted by a broad range of mosquito species, most of which are sylvatic or rural, Aedes aegypti, an anthropophilic and urban species, being considered the main ZIKV epidemic vector. In a context of emerging arbovirus infections (chikungunya (CHIKV) and dengue (DENV)) in Gabon since 2007, we conducted a retrospective study to detect other, related viruses. In samples collected during the concurrent CHIKV/DENV outbreaks that occurred in the capital city in 2007, we detected ZIKV in both humans and mosquitoes, and notably the Asian mosquito Aedes albopictus that recently invaded the country and was the main vector responsible for these outbreaks. We found that the Gabonese ZIKV strain belonged to the African lineage, and phylogenetic analysis suggested ancestral diversification and spread rather than recent introduction. These findings, showing for the first time epidemic ZIKV activity in an urban environment in Central Africa and the presence of ZIKV in the invasive mosquito Aedes albopictus, raise the possibility of a new emerging threat to human health.

Koichiro Tamura,  Daniel S. Peterson,  Nicholas Peterson … (2011)
Comparative analysis of molecular sequence data is essential for reconstructing the evolutionary histories of species and inferring the nature and extent of selective forces shaping the evolution of genes and species. Here, we announce the release of Molecular Evolutionary Genetics Analysis version 5 (MEGA5), which is a user-friendly software for mining online databases, building sequence alignments and phylogenetic trees, and using methods of evolutionary bioinformatics in basic biology, biomedicine, and evolution. The newest addition in MEGA5 is a collection of maximum likelihood (ML) analyses for inferring evolutionary trees, selecting best-fit substitution models (nucleotide or amino acid), inferring ancestral states and sequences (along with probabilities), and estimating evolutionary rates site-by-site. In computer simulation analyses, ML tree inference algorithms in MEGA5 compared favorably with other software packages in terms of computational efficiency and the accuracy of the estimates of phylogenetic trees, substitution parameters, and rate variation among sites. The MEGA user interface has now been enhanced to be activity driven to make it easier for the use of both beginners and experienced scientists. This version of MEGA is intended for the Windows platform, and it has been configured for effective use on Mac OS X and Linux desktops. It is available free of charge from http://www.megasoftware.net.

N Saitou,  M Nei,  Andrey Rzhetsky (1987)
A new method called the neighbor-joining method is proposed for reconstructing phylogenetic trees from evolutionary distance data. The principle of this method is to find pairs of operational taxonomic units (OTUs [= neighbors]) that minimize the total branch length at each stage of clustering of OTUs starting with a starlike tree. The branch lengths as well as the topology of a parsimonious tree can quickly be obtained by using this method. Using computer simulation, we studied the efficiency of this method in obtaining the correct unrooted tree in comparison with that of five other tree-making methods: the unweighted pair group method of analysis, Farris's method, Sattath and Tversky's method, Li's method, and Tateno et al.'s modified Farris method. The new, neighbor-joining method and Sattath and Tversky's method are shown to be generally better than the other methods.

This work was supported by CIRMF, which is funded by the Gabonese Government, Total Gabon and the French Foreign Ministry. It was also partially financed by grants from Fondation Christophe et Rodolphe Mérieux, Institut de France, Institut de recherches pour le développement (IRD),and Metabiota. The funders had no role in study design, data collection and analysis, decision to publish, or preparation of the manuscript.