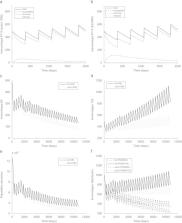 Many emerging and reemerging viruses, such as rabies, SARS, Marburg, and Ebola have bat populations as disease reservoirs. Understanding the spillover from bats to humans and other animals, and the associated health risks requires an analysis of the disease dynamics in bat populations. Traditional compartmental epizootic models, which are relatively easy to implement and analyze, usually impose unrealistic aggregation assumptions about disease-related structure and depend on parameters that frequently are not measurable in field conditions. We propose a novel combination of computational and adaptive modeling approaches that address the maintenance of emerging diseases in bat colonies through individual (intra-host) models of the response of the host to a viral challenge. The dynamics of the individual models are used to define survival, susceptibility and transmission conditions relevant to epizootics as well as to develop and parametrize models of the disease evolution into uniform and diverse populations. Applications of the proposed approach to modeling the effects of immunological heterogeneity on the dynamics of bat rabies are presented.

Identification of a novel coronavirus in bats.

Chase Ellis,  J. S. Malik Peiris,  Percy Chu … (2005)
Exotic wildlife can act as reservoirs of diseases that are endemic in the area or can be the source of new emerging diseases through interspecies transmission. The recent emergence of severe acute respiratory syndrome-associated coronavirus (SARS-CoV) highlights the importance of virus surveillance in wild animals. Here, we report the identification of a novel bat coronavirus through surveillance of coronaviruses in wildlife. Analyses of the RNA sequence from the ORF1b and S-gene regions indicated that the virus is a group 1 coronavirus. The virus was detected in fecal and respiratory samples from three bat species (Miniopterus spp.). In particular, 63% (12 of 19) of fecal samples from Miniopterus pusillus were positive for the virus. These findings suggest that this virus might be commonly circulating in M. pusillus in Hong Kong.

Stephen Y T Chan,  Ee Lim,  Poh-Sim Hooi … (2002)
In late 1998, Nipah virus emerged in peninsular Malaysia and caused fatal disease in domestic pigs and humans and substantial economic loss to the local pig industry. Surveillance of wildlife species during the outbreak showed neutralizing antibodies to Nipah virus mainly in Island flying-foxes (Pteropus hypomelanus) and Malayan flying-foxes (Pteropus vampyrus) but no virus reactive with anti-Nipah virus antibodies was isolated. We adopted a novel approach of collecting urine from these Island flying-foxes and swabs of their partially eaten fruits. Three viral isolates (two from urine and one from a partially eaten fruit swab) that caused Nipah virus-like syncytial cytopathic effect in Vero cells and stained strongly with Nipah- and Hendra-specific antibodies were isolated. Molecular sequencing and analysis of the 11,200-nucleotide fragment representing the beginning of the nucleocapsid gene to the end of the glycoprotein gene of one isolate confirmed the isolate to be Nipah virus with a sequence deviation of five to six nucleotides from Nipah virus isolated from humans. The isolation of Nipah virus from the Island flying-fox corroborates the serological evidence that it is one of the natural hosts of the virus.