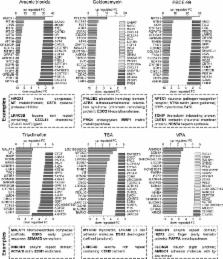 The in vitro test battery of the European research consortium ESNATS (‘novel stem cell-based test systems’) has been used to screen for potential human developmental toxicants. As part of this effort, the migration of neural crest (MINC) assay has been used to evaluate chemical effects on neural crest function. It identified some drug-like compounds in addition to known environmental toxicants. The hits included the HSP90 inhibitor geldanamycin, the chemotherapeutic arsenic trioxide, the flame-retardant PBDE-99, the pesticide triadimefon and the histone deacetylase inhibitors valproic acid and trichostatin A. Transcriptome changes triggered by these substances in human neural crest cells were recorded and analysed here to answer three questions: (1) can toxicants be individually identified based on their transcript profile; (2) how can the toxicity pattern reflected by transcript changes be compacted/dimensionality-reduced for practical regulatory use; (3) how can a reduced set of biomarkers be selected for large-scale follow-up? Transcript profiling allowed clear separation of different toxicants and the identification of toxicant types in a blinded test study. We also developed a diagrammatic system to visualize and compare toxicity patterns of a group of chemicals by giving a quantitative overview of altered superordinate biological processes (e.g. activation of KEGG pathways or overrepresentation of gene ontology terms). The transcript data were mined for potential markers of toxicity, and 39 transcripts were selected to either indicate general developmental toxicity or distinguish compounds with different modes-of-action in read-across. In summary, we found inclusion of transcriptome data to largely increase the information from the MINC phenotypic test.

Adrian Alexa,  Thomas Lengauer,  Jörg Rahnenführer (2006)
The result of a typical microarray experiment is a long list of genes with corresponding expression measurements. This list is only the starting point for a meaningful biological interpretation. Modern methods identify relevant biological processes or functions from gene expression data by scoring the statistical significance of predefined functional gene groups, e.g. based on Gene Ontology (GO). We develop methods that increase the explanatory power of this approach by integrating knowledge about relationships between the GO terms into the calculation of the statistical significance. We present two novel algorithms that improve GO group scoring using the underlying GO graph topology. The algorithms are evaluated on real and simulated gene expression data. We show that both methods eliminate local dependencies between GO terms and point to relevant areas in the GO graph that remain undetected with state-of-the-art algorithms for scoring functional terms. A simulation study demonstrates that the new methods exhibit a higher level of detecting relevant biological terms than competing methods.

Gabsang Lee,  Eirini P. Papapetrou,  Hyesoo Kim … (2009)
SUMMARY The isolation of human induced pluripotent stem cells (iPSCs)1-3 offers a novel strategy for modeling human disease. Recent studies have reported the derivation and differentiation of disease-specific human iPSCs4-7. However, a key challenge in the field is the demonstration of disease-related phenotypes and the ability to model pathogenesis and treatment of disease in iPSCs. Familial dysautonomia (FD) is a rare but fatal peripheral neuropathy caused by a point mutation in IKBKAP 8 involved in transcriptional elongation9. The disease is characterized by the depletion of autonomic and sensory neurons. The specificity to the peripheral nervous system and the mechanism of neuron loss in FD are poorly understood due to the lack of an appropriate model system. Here we report the derivation of patient specific FD-iPSCs and the directed differentiation into cells of all three germ layers including peripheral neurons. Gene expression analysis in purified FD-iPSC derived lineages demonstrates tissue specific mis-splicing of IKBKAP in vitro. Patient-specific neural crest precursors express particularly low levels of normal IKBKAP transcript suggesting a mechanism for disease specificity. FD pathogenesis is further characterized by transcriptome analysis and cell based assays revealing marked defects in neurogenic differentiation and migration behavior. Finally, we use FD-iPSCs for validating the potency of candidate drugs in reversing aberrant splicing and ameliorating neuronal differentiation and migration. Our study illustrates the promise of iPSC technology for gaining novel insights into human disease pathogenesis and treatment.