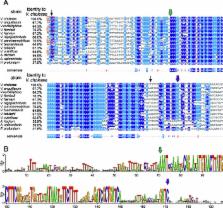 Vibrio cholerae, the causative agent of the cholera disease, is commonly used as a model organism for the study of bacteria with multipartite genomes. Its two chromosomes of different sizes initiate their DNA replication at distinct time points in the cell cycle and terminate in synchrony. In this study, the time-delayed start of Chr2 was verified in a synchronized cell population. This replication pattern suggests two possible regulation mechanisms for other Vibrio species with different sized secondary chromosomes: Either all Chr2 start DNA replication with a fixed delay after Chr1 initiation, or the timepoint at which Chr2 initiates varies such that termination of chromosomal replication occurs in synchrony. We investigated these two models and revealed that the two chromosomes of various Vibrionaceae species terminate in synchrony while Chr2-initiation timing relative to Chr1 is variable. Moreover, the sequence and function of the Chr2-triggering crtS site recently discovered in V. cholerae were found to be conserved, explaining the observed timing mechanism. Our results suggest that it is beneficial for bacterial cells with multiple chromosomes to synchronize their replication termination, potentially to optimize chromosome related processes as dimer resolution or segregation.

DNA sequence of both chromosomes of the cholera pathogen Vibrio cholerae.

H Qin,  Rita Colwell,  D. Haft … (2000)
Here we determine the complete genomic sequence of the gram negative, gamma-Proteobacterium Vibrio cholerae El Tor N16961 to be 4,033,460 base pairs (bp). The genome consists of two circular chromosomes of 2,961,146 bp and 1,072,314 bp that together encode 3,885 open reading frames. The vast majority of recognizable genes for essential cell functions (such as DNA replication, transcription, translation and cell-wall biosynthesis) and pathogenicity (for example, toxins, surface antigens and adhesins) are located on the large chromosome. In contrast, the small chromosome contains a larger fraction (59%) of hypothetical genes compared with the large chromosome (42%), and also contains many more genes that appear to have origins other than the gamma-Proteobacteria. The small chromosome also carries a gene capture system (the integron island) and host 'addiction' genes that are typically found on plasmids; thus, the small chromosome may have originally been a megaplasmid that was captured by an ancestral Vibrio species. The V. cholerae genomic sequence provides a starting point for understanding how a free-living, environmental organism emerged to become a significant human bacterial pathogen.

Stéphanie Penaud,  Michèle Valens,  Francois Cornet … (2004)
We have explored the Escherichia coli chromosome architecture by genetic dissection, using a site-specific recombination system that reveals the spatial proximity of distant DNA sites and records interactions. By analysing the percentages of recombination between pairs of sites scattered over the chromosome, we observed that DNA interactions were restricted to within subregions of the chromosome. The results indicated an organization into a ring composed of four macrodomains and two less-structured regions. Two of the macrodomains defined by recombination efficiency are similar to the Ter and Ori macrodomains observed by FISH. Two newly characterized macrodomains flank the Ter macrodomain and two less-structured regions flank the Ori macrodomain. Also the interactions between sister chromatids are rare, suggesting that chromosome segregation quickly follows replication. These results reveal structural features that may be important for chromosome dynamics during the cell cycle.