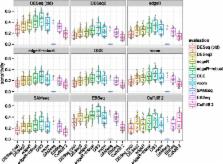 In comparative high-throughput sequencing assays, a fundamental task is the analysis of count data, such as read counts per gene in RNA-seq, for evidence of systematic changes across experimental conditions. Small replicate numbers, discreteness, large dynamic range and the presence of outliers require a suitable statistical approach. We present DESeq2, a method for differential analysis of count data, using shrinkage estimation for dispersions and fold changes to improve stability and interpretability of estimates. This enables a more quantitative analysis focused on the strength rather than the mere presence of differential expression. The DESeq2 package is available at http://www.bioconductor.org/packages/release/bioc/html/DESeq2.html.

, , (2013)
Next-generation sequencing technologies generate millions of short sequence reads, which are usually aligned to a reference genome. In many applications, the key information required for downstream analysis is the number of reads mapping to each genomic feature, for example to each exon or each gene. The process of counting reads is called read summarization. Read summarization is required for a great variety of genomic analyses but has so far received relatively little attention in the literature. We present featureCounts, a read summarization program suitable for counting reads generated from either RNA or genomic DNA sequencing experiments. featureCounts implements highly efficient chromosome hashing and feature blocking techniques. It is considerably faster than existing methods (by an order of magnitude for gene-level summarization) and requires far less computer memory. It works with either single or paired-end reads and provides a wide range of options appropriate for different sequencing applications. featureCounts is available under GNU General Public License as part of the Subread (http://subread.sourceforge.net) or Rsubread (http://www.bioconductor.org) software packages.

Mark Robinson, Gordon K. Smyth (2008)
We derive a quantile-adjusted conditional maximum likelihood estimator for the dispersion parameter of the negative binomial distribution and compare its performance, in terms of bias, to various other methods. Our estimation scheme outperforms all other methods in very small samples, typical of those from serial analysis of gene expression studies, the motivating data for this study. The impact of dispersion estimation on hypothesis testing is studied. We derive an "exact" test that outperforms the standard approximate asymptotic tests.