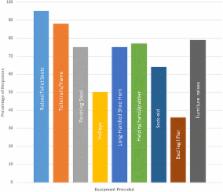 Total hip replacement (THR) is one of the most common orthopaedic procedures in the United Kingdom (UK). Historically, people following THR have been provided with hip precautions and equipment such as: raised toilet seats and furniture rises, in order to reduce the risks of dislocation post-operation. The purpose of this study was to determine current practices in the provision of these interventions in the UK for people following primary THR.

A 27-question, self-administered online survey was developed and distributed to UK physiotherapists and occupational therapists involved in the management of people following primary THR (target respondents). The survey included questions regarding the current practices in the provision of equipment and hip precautions for THR patients, and physiotherapist’s and occupational therapist’s attitudes towards these practices. The survey was disseminated through print and web-based/social media channels.

170 health professionals (87 physiotherapists and 83 occupational therapists), responded to the survey. Commonly prescribed equipment in respondent’s health trusts were raised toilet seats (95 %), toilet frames and rails (88 %), furniture raises (79 %), helping hands/grabbers (77 %), perching stools (75 %) and long-handled shoe horns (75 %). Hip precautions were routinely prescribed by 97 % of respondents. Hip precautions were most frequently taught in a pre-operative group (52 % of respondents). Similarly equipment was most frequently provided pre-operatively (61 % respondents), and most commonly by occupational therapists (74 % respondents). There was variability in the advice provided on the duration of hip precautions and equipment from up to 6 weeks post-operatively to life-time usage.

B Morrey,  Jason Woo,  Maximillian Soong (1982)
During the ten-year period ending in 1978, 10,500 conventional total hip arthroplasties were performed at the Mayo Clinic; dislocation developed after 331 (3.2 per cent) of these procedures. Cross correlations of the data were performed using multivariate analysis. This analysis showed that previous surgery on the hip was the most significant of the factors predisposing to dislocation, the incidence doubling from 2.4 per cent (in hips without previous surgery) to 4.8 per cent (in hips with previous surgery) (p less than 0.001). The dislocation rate was 2.3 per cent after an anterolateral approach and 5.8 per cent after a posterior approach (p less than 0.01). The size of the head of the femoral component was not a strongly influential factor. The incidence of dislocation was 17.6 per cent in the hips that had osteotomy and avulsion of the greater trochanter, compared with 2.8 per cent in those in which the trochanteric osteotomy united (p less than 0.001). Reoperation for instability of the hip was performed in a third of the patients, but in 31 per cent of the patients whose hip was reoperated on the instability persisted after the revision.

Health related quality of life outcomes after total hip and knee arthroplasties in a community based population.

M Saurez-Almazor,  D Voaklander,  Ivan Johnston … (2000)
To quantify the magnitude of change seen with pain, function, and quality of life outcomes 6 months after total hip and knee arthroplasties (THA, TKA) within a community based cohort of a regional health district. An inception cohort of 504 patients who received primary THA (228) or TKA (276) was prospectively followed. All patients resided in the community and were assessed within one month prior to surgery and 6 months postoperatively. Health related quality of life measures were evaluated with the Western Ontario and McMaster Universities (WOMAC) Osteoarthritis Index and the Medical Outcome Survey Short Form SF-36. Perioperative factors were extracted from medical charts. Health services utilization data were collected from regional health databases. Over 75% of patients reported improvement in joint-specific pain and function, regardless of the type of joint replaced. Other health dimensions such as social function, bodily pain, physical function, vitality, and general health showed significant improvement after surgery. Those psychosocial dimensions with modest changes had baseline values comparable to age and sex adjusted normal values; whereas, bodily pain and physical function, which had large changes, had values lower than the normal values. Ninety-one percent of patients receiving THA were satisfied with their surgery, whereas 77% were satisfied with their TKA. The average length of stay was 7 days and the in-hospital complication rate was 0.34 per patient. Large improvements were reported for pain and function after joint arthroplasties, while small to moderate changes were seen in other areas related to quality of life. Patients with hip arthroplasties showed greater improvement in pain and function and were more satisfied with their outcomes than patients with knee arthroplasties. Although pain and function show large improvements, bodily pain and physical function were less than the values reported in the general population.